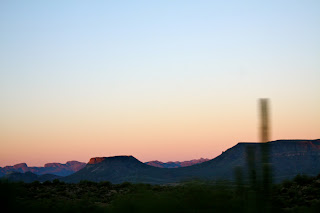 What I love most about Arizona is the saguaro cactus. Its beauty--stretching like long fingers in the sky-- it can reach about 50 feet. They're haunting and enchanting, holding birds in their holes, living for as long as 150 years; they whisper stories, have lived many lives. At night flowers burst open, closing at  noon. Of which, bats come and go to feed. 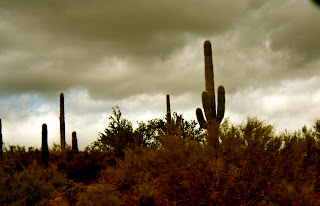 Which seems to be the story of my relationship to Arizona: coming and going. A whirlwind. A blur of faces. A plethora of memories and people. All of who are a part of my childhood. And so when I see them now (I visited during Thanksgiving), I'm reminded of rocks. Hot suns. Red fingers. Of sliding down red rocks in Sedona. Of polishing rocks with my great-grandma. Who now suffers from Alzheimer's. And can't remember those rocks that I've held onto. Made necklaces out of. The smooth turquoise textures. The beads. The hot days spent sifting through rock gardens, mountains. Of cracking open rocks with hammers. To see the wonder as they're split open: lines of life, images of faces, shadows and sparkles. Since a child, I've made many small trips to Prescott Valley to visit my grandparents, cousins, aunts and uncles.  I can remember driving with my family from Wisconsin to Arizona. Those long days spent staring out the window, losing myself in dark slopes and cacti curving upward like arms, opening like flutes. But all of these trips always fold together. Daylight and nightfall. Conversations and adventures swerve like dreams. I'm coming and going. I'm there. Gone. 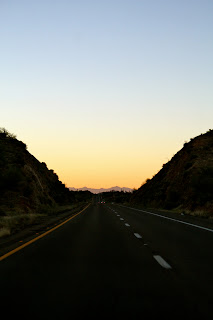 I'm trying to bring this alive to my children; to pass this wonder on. To give them these stories. To let them live them; to make their own. Already the places and faces are changing, moving. My great grandmother doesn't remember me; doesn't know them. She calls Amaya "blondie" and wonders who this small child is. Her jaw clicks, moves up and down without sound. She's already left this space.

After a saguaro dies, its woodlike ribs can be used to build fences, furniture, roofs. Those holes that birds lived in can be found among the dead.

Which reminds me of what we take; what we leave behind.
Posted by Liz Scheid at 8:44 PM 4 comments:

Number of rejections this week: 2

Last weekend, we ventured to Pismo Beach and Morro Bay for a much needed family retreat. We spent most of our time collecting seashells on the beach. Amaya loves the ocean and has no fear of going into the water. She actually coerced me to join her, even though I was in a dress, and even though the water was so cold it burned my feet. 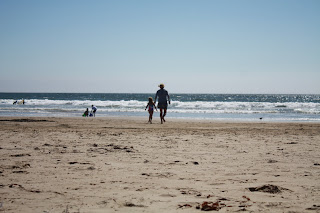 But it was worth it. The cold water seemed to resonate and wake my senses. Despite, Andy trying to eat the sand and hermit crabs, the trip was a success.

Also, Amaya picked up a dead jellyfish. She didn't get stung.  It was a clear beautiful mass of jelly-like substance; malleable, heartless, brainless. 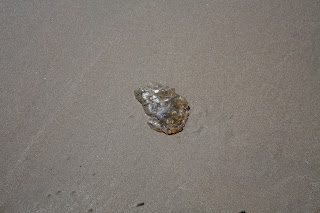 For further meditations on jellyfish (although this was written in an entirely different context), you could read my essay, Jellyfish here: http://www.mississippireview.com/2009/Vol15No4-Oct09/1504-100809-scheid-jellyfish.html

Also: have been reading At The Water's Edge, by Carl Zimmer (http://carlzimmer.com/books/watersedge/index.html) and am overwhelmed with floods of fascinating and confusing information. I'm only on page 79, and have so many questions, but am enjoying living in that space of wonder.

As Rilke says, "Be patient toward all that is unsolved in your heart and try to love the questions themselves. Do not seek the answers, which cannot be given you because you would not be able to live them. And the point is to live everything. Live the questions." In other words, live in the chaos of confusion.

The patterns that connect all life forms are fascinating; how similar we all are (animals, alike); how a slight shift from the pattern of life formation could create something different (fins for swimming, hands for exploring, claws for digging), but in the beginning (at the embryo stage), we are all so similar.

"The Swiss found that some of the same key genes that form a human arm form the front fin of a zebra fish, and in a pattern that's practically identical at first" (Zimmer 71).


Speaking of being one with nature (ha!), last night I dismantled several black widow webs in the backyard. Apparently, they're water-resistant. And their webs are similar in texture to fishing wire. No joke.  In order to annihilate these intricate beauties, I had to use the broom.
Posted by Liz Scheid at 12:48 PM No comments: